Thank you for your patience while we retrieve your images.

Visitors 114
7 photos
It was 6 degrees when I left the car and headed for the lighthouse. Once down on the ledge facing the lighthouse shooting the moon that was behind it strong winds began hitting me from the lake. Shortly afterwards the shutter would click but the pictures stopped appearing on the LCD. Assuming that the LCD had just frozen up I kept shooting away figuring once I warmed the camera up I could see the shots that I had taken. I moved quickly to the other side of the lighthouse as the sun was rising. I tried changing the battery before I began shooting the sunrise but the full batteries in my pocket had lost most of their charge.

As the sun began to rise I shot frame after frame, once and only once a picture flashed up on the LCD... it would be one of only 7 pictures that had saved to the compact flash card this morning.

Monnie had suggested that the compact flash may have froze up instead of the LCD which was definately a possiblity. When I called Canon they also suggested that the processor could have also froze up because the 5D is not meant to be operated in temperatures below zero (which I am sure it was with the wind chill), although other people shoot in extreme weather without any issues...


I need to develop a cover for my 5D with pockets on the inside for hand warmers to keep the camera body warm before I go back next month...

Moon over the Lighthouse 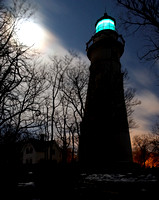 Distant View of the Lighthouse

Wide View of the Lighthouse and Surrounding Shoreline

Freighter in the Ice